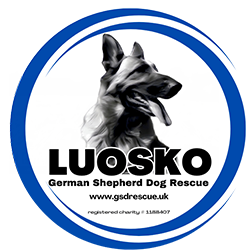 'LUOSKO' derived from our original dogs back in 2014, LUCCA, OSCAR, and RILEY (aka Solophina ASKO), and has since been adopted as the family name and trusted name for training, rehabilitating, and re-homing German Shepherds responsibly. After losing LUNA in 2020, we altered it to include LUCCA & LUNA as the LU as a memorial.

LUOSKO German Shepherd Dog Rescue, founded in 2014, was initially set up as a walking, daycare, and boarding service; in 2015, we quickly became a small-scale all-breed rescue, rescuing dogs of all breeds from around the UK and Europe.

Over the years, the organization has gone through several transitions, from the services offered to the day-to-day imagery. In 2018 the rescue flourished more than ever, and some of the services previously provided were dropped to allow for the care of the increased amount of rescue dogs. It was then decided to end the old services entirely and hand over the assets to the new up-and-coming non-profit rescue.

From personal experience of owning 5 German Shepherds, we've decided to become a rescue focused on the breed. In early 2019 the rescue became a breed-specific rescue for German Shepherds, later we also became residents at the Cheadle site, which allowed us to take care