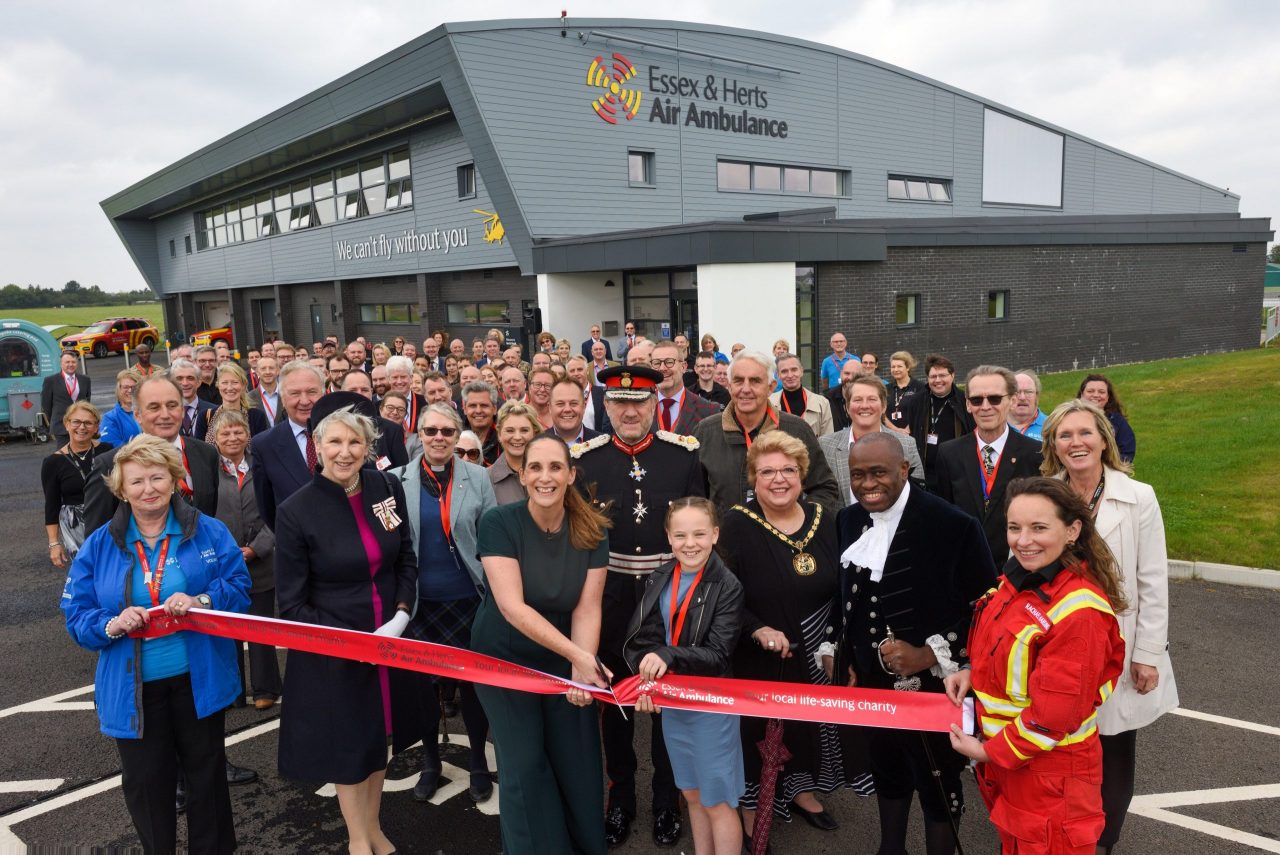 Over 100 guests attended the event including airlifted patients as well as those directly involved with the development of the new airbase, along with important partners of the charity including representatives from the East of England Ambulance Service, police, fire and the military, as well as the Lord Lieutenants of Essex and Hertfordshire, the High Sheriff of Hertfordshire, the Chair of Epping Forest District Council, and many another distinguished guests.

Once the ribbon was cut, the building was blessed by Area Dean for Epping and Ongar, the Reverend Lee Batson. Guests were then invited to take a tour of the new purpose-built facility, where they had the opportunity to meet the fundraising, operational and clinical teams, who together provide a life-saving service 24/7 to the local communities of Essex and Hertfordshire.

Work on the facility began back in February 2020 after planning permission was granted by Epping Forest District Council. The project was managed by quantity surveyors Castons and designed by architects Hurley Porte and Duell and structural engineer specialists Superstructures. The new airbase was built by Barnes Construction and was delivered on time and within budget despite the challenges of the COVID-19 pandemic.

The new building includes a hangar that houses one of EHAAT’s two helicopters. However, there is also space for both helicopters when necessary, for example, to permit aircraft maintenance. The helipad has underground heating beneath it to keep it free of snow and ice during the winter months. The new airbase also has a specially designed garage for two of its rapid response vehicles.

In addition to these spaces, the airbase has specific areas for training, mentoring, patient liaison and fundraising. There is also space for cross-training with other emergency services, which benefits both the charity and the wider pre-hospital care community. Importantly, part of the new building has a dedicated interactive visitor centre which allows EHAAT to welcome and engage with its supporters so that they can learn more about the life-saving work of the charity.

“After more than three years in the planning, I am so proud to see our airbase open and fully operational.

“As well as providing improved facilities for the aircraft, vehicles and aircrew, this fantastic building now gives us security of tenure which will allow us to plan effectively for the future. In addition, by owning the building we will see significant future cost savings. The building cost in the region of £4.5 million and a project of this magnitude could not have been possible without the expertise and support of a highly knowledgeable and professional team. I would like to say a very big thank you to all those involved including our amazing fundraisers and donors for helping to make this project a reality.”

As well as money raised and donated, EHAAT financed the new airbase by making use of some of its reserves. It was also able to gain financial support from a number of corporate supporters, as well as securing £1.5 million from the government, as part of its one-off support funding for capital projects being carried out by air ambulances in England.

“The Trustees are delighted that it has been possible to construct a state-of-art facility for both our critical care and fundraising teams to operate from.

“EHAAT are committed to making the very best choices not only for our staff and for our community but also for the environment. Therefore I am extremely pleased that the building has been designed with `green’ issues very much to the fore. It includes charging points for electric cars and photovoltaic panels on the roof which will generate electricity, with any excess supplied to the National Grid. The building has been well insulated in order to retain heat and reduce noise pollution and it makes as much use as possible of natural light in order to save on electricity.”

However, the last word goes to EHAAT’s Medical Director, Neil Durge, who is absolutely delighted with the new facility. He said:

“Last year, we carried out just under 2,400 missions using our two air ambulances and four rapid response vehicles. After years of planning and preparation, it is great to see this state-of-the-art building being used as a base from which our highly skilled pre-hospital care teams can attend critically ill and injured patients across Essex, Hertfordshire and the surrounding areas.

“I’m delighted for the Charity, our supporters, our clinicians, our patients, our staff and our volunteers as this new airbase will be central to how we deliver care and how we continue to improve the quality of our service to patients.”