Another busy year at horse sanctuary 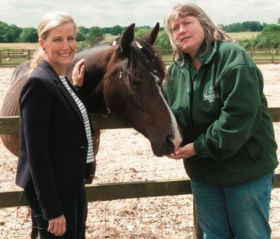 As Remus Horse Sanctuary, in Essex, enters its 35th anniversary year, founder Sue Burton looks back at 2017. The charity was founded in 1983 and is now home to more horses than ever before due to the horse welfare crisis in the UK and the many animals caught up in its icy grip. Presently Remus gives sanctuary to 82 horses and ponies, nine donkeys and Jess, the mule.
Sue said: “The year 2017 saw the usual ups and downs of life at the charity – the ups were definitely watching the rescued animals come in to the sanctuary and recover from their trauma and, of course, the visit from HRH The Countess of Wessex in June was a highlight for all of us; while the downs had to be the break-in and the loss of friends, both two and four legged.”

The break-in occurred in November when, already strapped for cash and heading into the hard winter months, vandals broke in to the premises at Little Farm, Buttsbury, near Ingatestone stealing more than £1,000 in cash and creating significant damage to the charity’s offices and equipment – which required thousands of pounds to repair and rebuild.

Remus Horse Sanctuary is funded totally by public donations and its own fundraising and event activities. Details of the Kids’ Pony Days and Open Days for 2018 can already be found on the website at www.remussanctuary.org and special events for the 35th anniversary year will be announced in due course. The Countess, who joined the charity as a Patron in 2013, visited the sanctuary on June 29, 2017, for a tour of the facilities and to learn more about issues such as tethering, cruelty and neglect, indiscriminate breeding and abandonment, and elderly horses – all of which continue to escalate around the UK.

The sanctuary continues to rescue horses and ponies from across Southern England, who are victims of physical and mental abuse, be it as a result of ignorance or malicious intent.

Sue also works alongside other like-minded organisations to inform and update on rescue operations and on the particular care required for elderly horses – of which the charity is a specialist.

“The sanctuary just couldn’t survive without the help, support, generosity and loyalty of the staff, volunteers and supporters”, said Sue, but still it’s incredibly tough to continue year on year. “I implore anyone who loves animals to get in touch and help us out.”

The sanctuary provides a safe environment for these animals that have been victims of physical and mental abuse, whether because of ignorance or malicious intent.

You can support the Remus Horse Sanctuary by donating unwanted clothing via www.icollectclothes.co.uk or booking a collection by calling 0344 879 4417